This blog post is going to focus on a gotcha that rears its ugly head when you have a fixed nav bar. Nowadays, it’s pretty common to see fixed nav bars. Let’s use Twitter as an example. Twitter doesn’t use Angular, so you wouldn’t want to test their site using Protractor, but what I’m about to talk about can also be applied to WebDriver (which can be used for non-AngularJS sites). 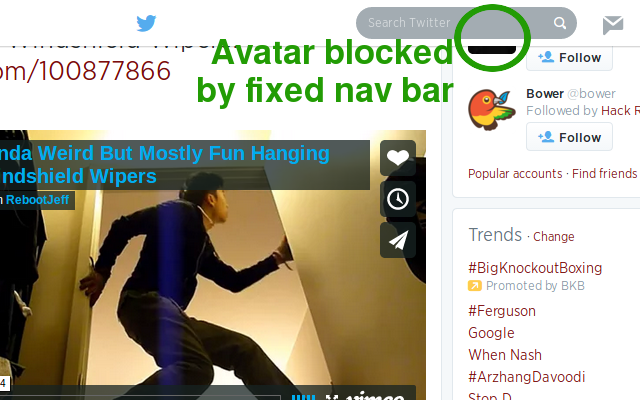 Here’s the problem: what if we want Protractor to click on the avatar under the fixed nav bar as seen in the screenshot above? Obviously, a human user would intuitively scroll to find an element before clicking on it. However, Protractor’s perspective is different.

Now imagine your test suite includes several tests (ooh la la!). In test #1, the actions of the test cause Protractor to scroll to the bottom of the page. In test #2, the test tries to perform the actions of Example A. Therefore, during test #2, Protractor tries to scroll back up the page until the target avatar is in the viewport, but this just brings the avatar directly under the fixed nav bar.

Then Protractor attempts a click by finding the center of the target. So even if a tiny portion of the avatar’s butt is displayed just below the bottom of the fixed nav bar, it won’t be clicked. Instead, Protractor will throw an error saying that the target could not be clicked. The error will also mention that the nav bar would receive the click event.

Well that sucks. Now what?

There are two main solutions to consider:

The first solution might not be a great idea because it’s a major alteration for the sake of testing. What if the fixed position of the nav bar causes other issues that your tests will reveal? I believe you want E2E tests to interact with a product that is very close to the product users will interact with. Changing the nav bar’s position just for testing goes against this philosophy. The main exception to this rule is animation: I believe it’s ok to disable animations for E2E testing just because it can take up a lot of time, slowing down your test/build process. Also, animations can just be very cumbersome for automated E2E systems like Protractor to deal with.

Solution: How to add pre-click scrolling

There are 3 syntax options above because I just wanted to present a few different coding styles. As you can probably tell, browser.executeScript() accepts a couple of parameters. The first one is the script, the second one is the script’s parameter. The script can either be a function (technically speaking, it’s a function reference) or a string representation of the script’s body. Syntax Option #3 was inspired by a Stack Overflow answer for a very similar situation (it was for WebDriver, but it was easy to translate to Protractor).

You may have noticed that the solution in Example B mentions promises, but the code in Example C does not use them. My understanding is that it’s not crucial to use every single promise that Protractor and WebDriverJS provide. For example, even though the .click() method returns a promise, you don’t see devs writing Protractor tests with exampleButton.click().then(function() { ... }); all the time.

So why did I mention promises in Example B? Just to reinforce the fact that browser.executeScript() will return a promise. By storing the result in a variable called “promise”, it tells other devs what to expect. That said, I admit it may not be terribly valuable. Let me know your opinion on this or any other part of the solution presented here.