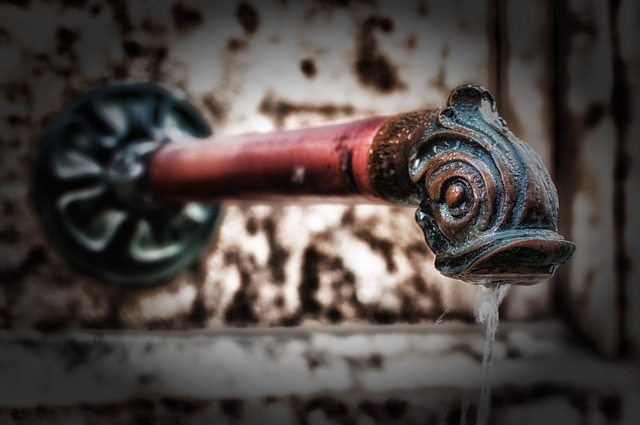 Why the image of a water pipe with flowing water? It will all make sense soon, my dear reader.

Given a bunch of arrays kept within a JavaScript hash table (plain object), we want to extract the arrays and combine them. In other words, we’re given a collection of arrays of elements and we want a single array of elements.

This example was inspired by some code I found in the codebase where I work. The use case was different, but the overall idea (extracting elements from within arrays that are within an object) is the same. To make things slightly more complex, the arrays of the input object could possibly contain null elements because the elements were being provided by a service that could sometimes return null.

The output has the nulls removed. We can pretty much assume we only want to see user objects in the output array; no other kinds of elements.

The following code snippet is a slightly modified version of someone else’s work. I’ve changed the variable names and comments, but the core logic/algorithm is the same.

Sadly, we need to create our own concatArray because Lodash doesn’t have such a utility method (I swear it used to exist in an earlier version …maybe).

With flow, we can read combineKeyedArrays as a series of 3 steps. First, we extract values from an object via values, then we flatten the resulting array via flatten, then we reject any falsey elements from the array via compact.

OMG WHERE DID THE INPUT/PARAMETER GO?!

We can stop referring to the input as keyedArrays. Our function combineKeyedArrays has now been written in a pointfree (aka point-free aka tacit) style. In other words, we no longer need to name - and refer back to - any parameter variable.

The word “type” is more specific. You already can infer you’ll be dealing with a keyboard. You don’t need to mention the keyboard at all when you use the verb “type” instead of the verb “hit”.

“I’m typing UNIX commands” is more concise and direct than “I’m hitting buttons on the keyboard to issue UNIX commands”. Both are valid, but the former is easier to understand even though it’s less comprehensive.

Now, let’s translate from Lodash to Ramda, a utility library that is much more aligned with the functional programming style. I’ve covered how to get started with Ramda in an earlier blog post that one friend labeled as an “excellent summary”. I must be pretty awesome :D.

We’ve gained so much:

By the way, possible documentation for our refactored, pointfree combineKeyedArrays involves a type signature as a comment, but admittedly, I’m still learning how to do proper, FP-style type signatures. Also, keep in mind that the names of your functions should help tell others what it does, and the fact that it’s composed of 3 easy-to-read methods is quite helpful as well.

Why don’t we say something more specific such as // {k: [user]} --> [user]? Because combineKeyedArrays clearly works with any type of element inside the arrays. It could even be considered as a utility function and added to an internal library of helpers. Whoooaaaaaa…

And because I appreciate you as a cool person, here’s a Gist that has all the code in one spot for your future reference.